Capacitive touch screens continue to evolve with the diversification of electronic devices, such as use in harsh environments, support for large displays, and support for various shapes such as curved surfaces. 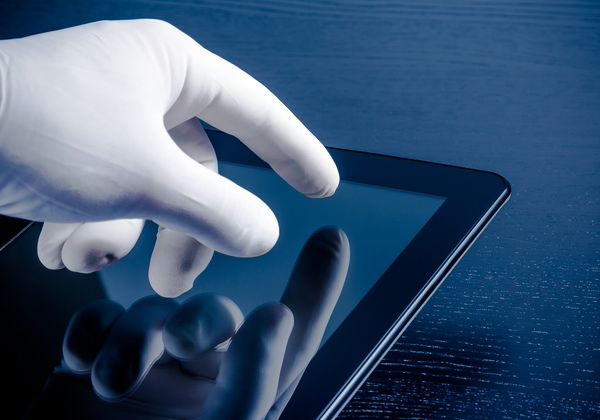 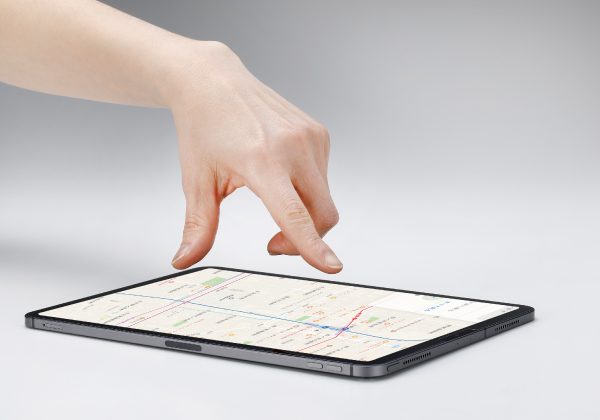 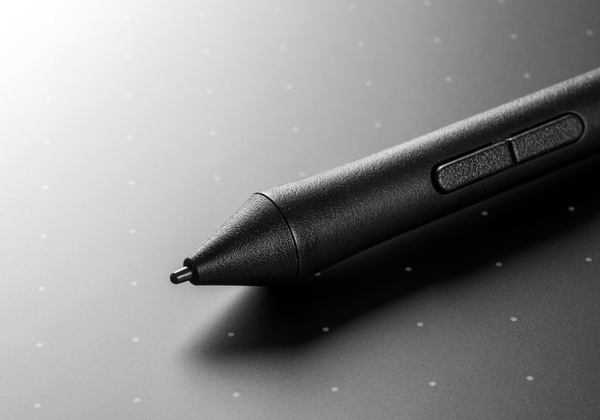 Operable with a pen 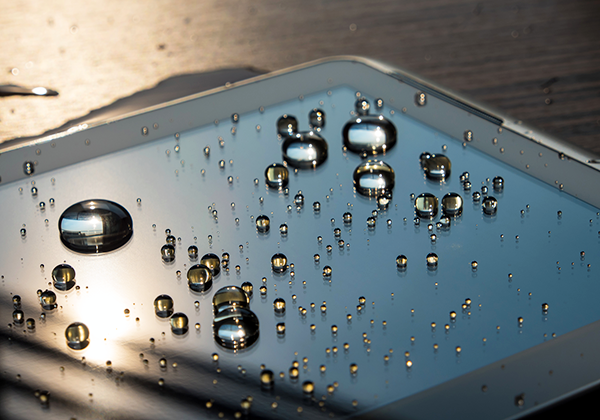 Operable when wet with water or oil 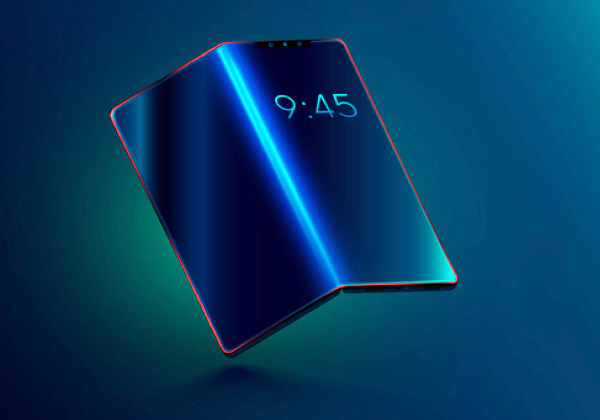 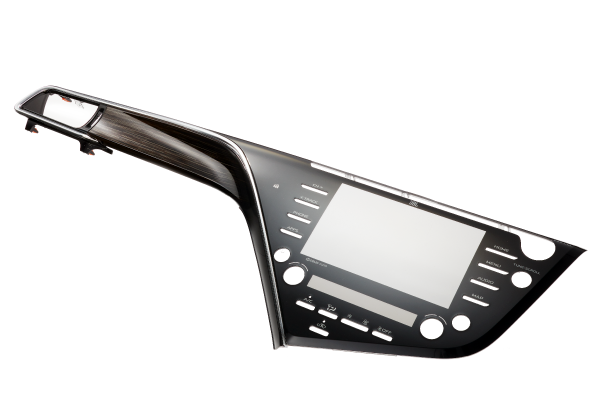 Operable through a thick cover panel 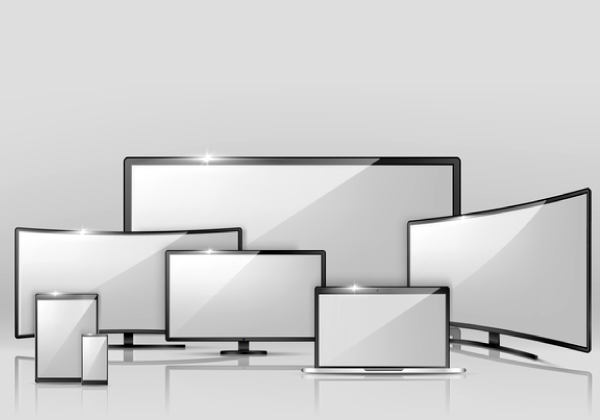 Capacitive touch screens use the weak capacitance change of just a few pF between the finger and the sensor as a signal. Because the signal is so small, external noise from interference such as water droplets and gloves can cause malfunctions.
NISSHA has developed a capacitive touch screen that can be operated accurately even in such a noisy environment by improving the following three points.

NISSHA’s original film double-sided simultaneous patterning technology has realized a more precise sensor arrangement with a small tolerance of X and Y electrode positions. As a result, the variation between individual sensors has been reduced, and the controller IC can be tuned more severely.

The characteristics of a capacitive touch screen have many factors that are determined by the controller IC. NISSHA has accumulated know-how to select the most suitable IC according to the customer’s application.

There is an increasing need for “hover input,” an operation technology that allows input without touching the panel, in applications such as medical sites and digital signage.
The capacitive touch screen does not detect when the finger touch on the panel, but detects the change in capacitance between the finger and the sensor. Therefore, by detecting the finger that are higher than touching the panel, contactless input is possible.

NISSHA is developing a capacitive touch screen that supports hover input by adopting a low-resistance conductive pattern and optimizing the controller IC.

Operable distance between fingertip and sensor : about 50 mm

Can be used in such situations

Operable even when wet with water or oil

The capacitance type touch screen detects the change in capacitance between the fingertip and the sensor as an input signal. Therefore, if the surface of the panel is wet with a conductive liquid such as oil or water, the capacitance generated by the liquid becomes a large noise, and there is a problem that the input signal from the finger cannot be detected. 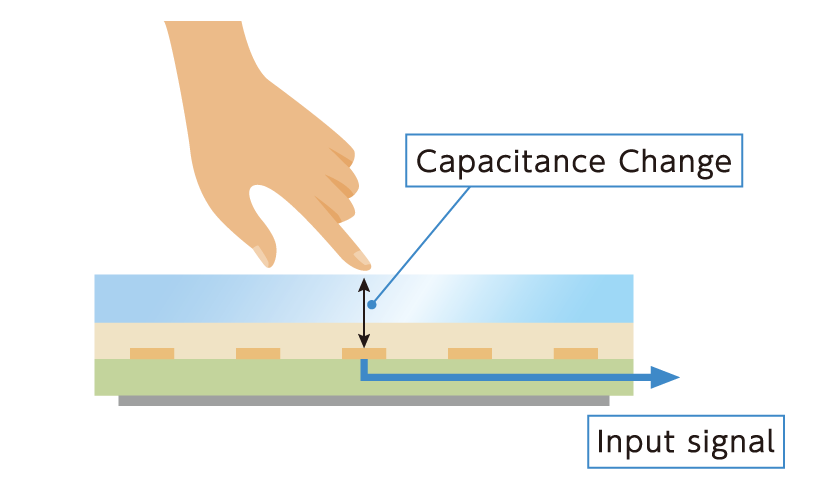 Operation demo when a small amount of water drops adhere

The touch panel, which is resistant to water droplets, can be used not only outdoors and at leisure, but also for industrial purposes with peace of mind.

Can be used in such situations
Outdoor use：humid and dew condensation areas such as rainy weather and snowfall areas
Industrial：refrigerated warehouses, greenhouses, outdoor work sites
Leisure Use：Use in sea, rivers and snowy mountains For outdoor sports such as bicycles, bikes, skis and snowboards

Gloves are made of insulation such as rubber or textile cloth. If you wear gloves and touch the touch screen, the input signal will be weakened due to the increased distance of the insulator between your finger and the sensor. 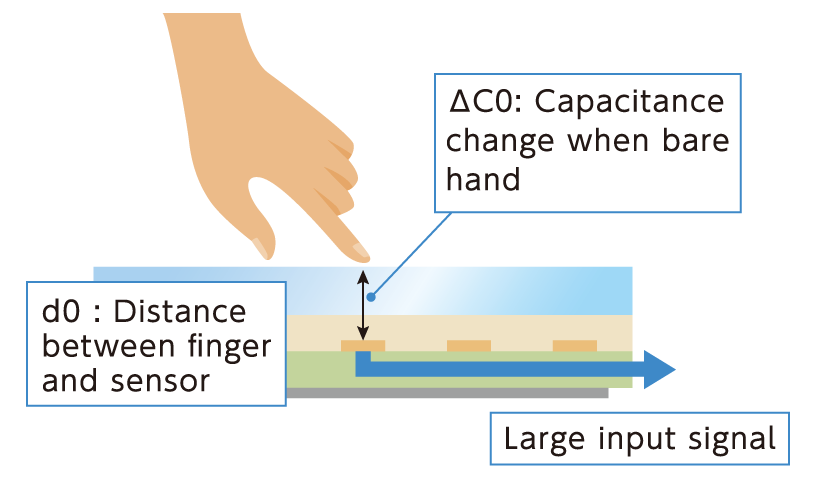 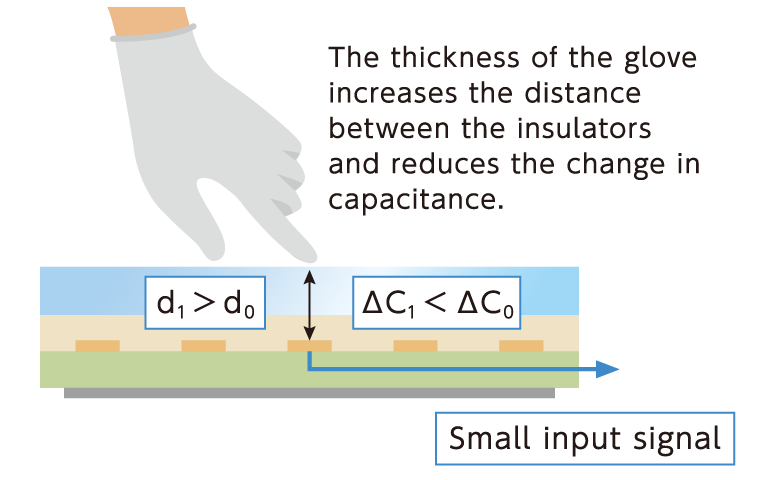 Operation demo video with gloves on

Input is possible by wearing rubber gloves up to 2 mm thick. We have confirmed that even cloth gloves can be operated up to a thickness of 1.5 mm. It can also be operated with nitrile gloves used in factories.

Operable with a pen

A stylus pen is used on tablet devices used in the field of illustration creation. Since the contact area between the tip of the stylus pen and the panel of the tablet terminal is very small, there is a problem that the input signal becomes small in the capacitive touch screen and it is easily affected by noise. 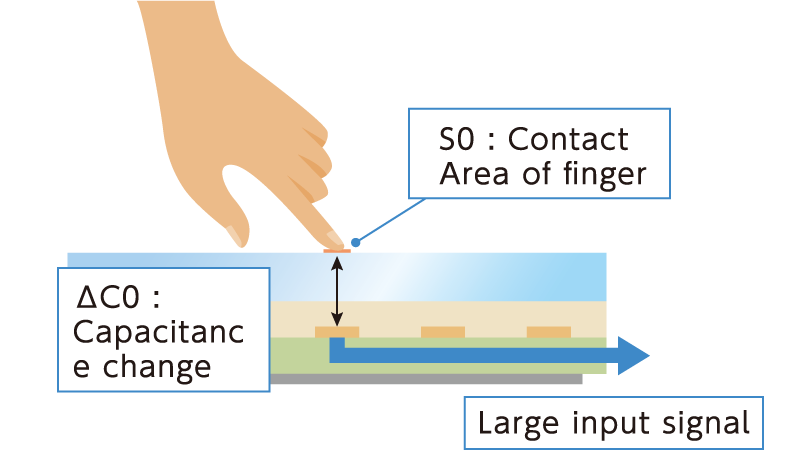 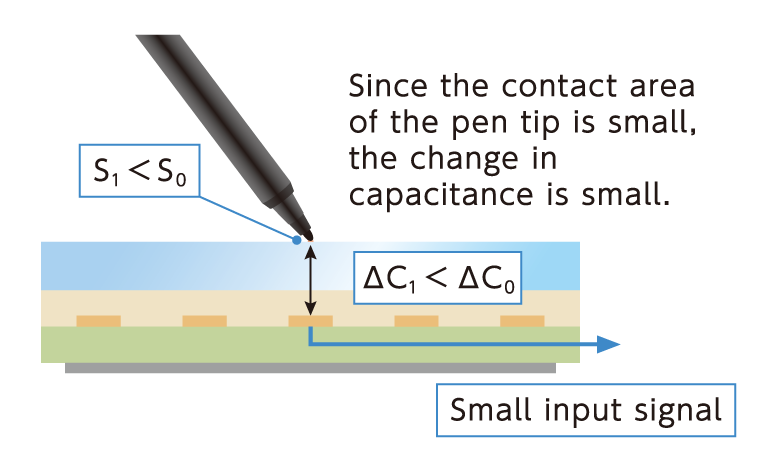 In NISSHA’s capacitive touch screen, the weak signal of the pen tip is increased by lowering the resistance of the sensor electrode and optimizing the IC, making it less susceptible to noise.
In addition, the sensor pattern with a line width of 10 μm formed by photo-etching realizes a higher-density sensor array than the conventional capacitive touch screen. Even the delicate designs that users draw on the panel can be faithfully drawn.
The pen is compatible with active stylus and passive stylus. 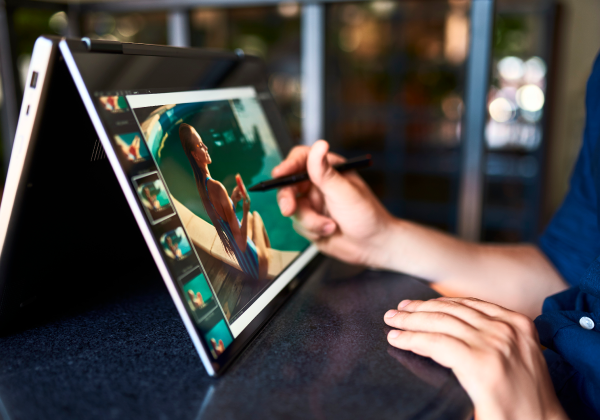 Operable through a thick cover panel

Operation through the cover panel, which reduces the input signal, was an issue for capacitive touch screens. The cover panel of the plastic molded product has a thickness of about 1 to 2 mm. As a result, the distance between the operating finger and the sensor increases, and the change in capacitance becomes small.

NISSHA has overcome this problem by using fine patterning technology for low-resistance ITO thin films and optimizing controller ICs.
NISSHA supports not only touch screen modules that are attached to glass panels, but also housing modules that have a touch screen attached to the display window of plastic molded products.

NISSHA is working on the development of new conductive materials that solve these problems, and is expanding the applications of capacitive touch screens.

Currently, the development of flexible information terminals is being actively carried out, and expectations are rising for the flexibility of touch screens.
The conductive material used for the sensor of the capacitive touch screen is ITO film. The ITO film is a crystallized inorganic material that is hard and brittle. Therefore, if it is bent, it will easily crack and the sensor will break.
Capacitive methods are used for touch screens of smartphones and tablet terminals, and improving the flexibility of touch screens is an important issue in order to make these devices flexible.
NISSHA is working to make touch screens more flexible using a new conductive material called “Ag nanowire ink”. 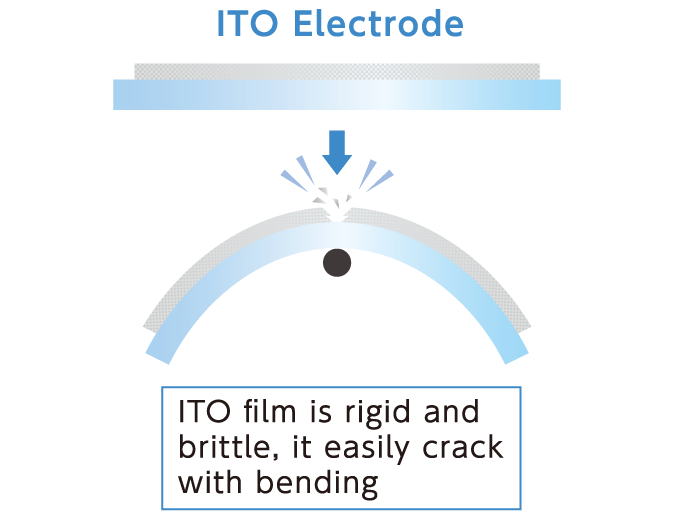 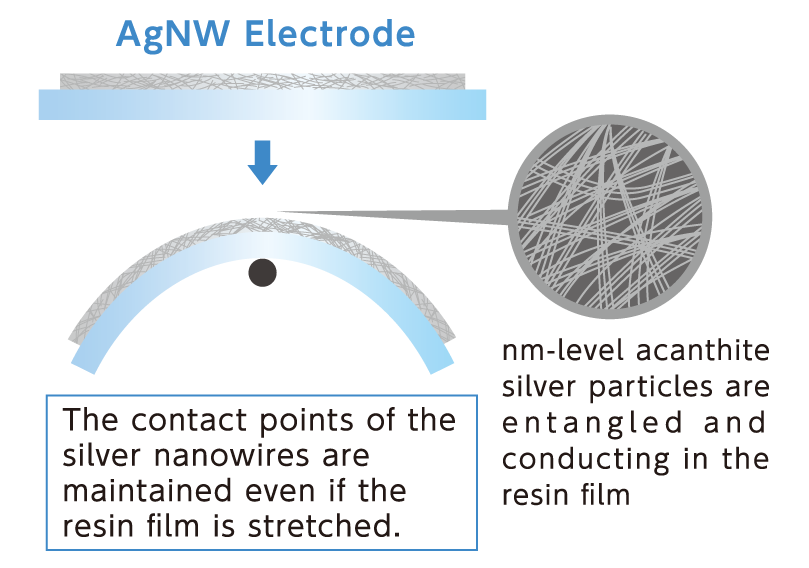 On the other hand, Ag nanowire ink has a problem that the patterning technology has not been established yet. It is easy to apply it to the entire surface of the film as a coating film, but it was difficult to process the coating film into a sensor pattern. In particular, the touch screen sensor has a very fine pattern with a line width of 10 μm. Since Ag nanowire ink is a resin coating film, it cannot be processed by conventional photo etching, and it is a material with too low viscosity to be used in screen printing, which is generally used in wiring processing.

We have realized a touch screen whose resistance value does not change even after a bending test with a bending diameter of φ6 mm x 200,000 times. This technology contributes to the development of various new devices such as displays and smartphones.

As displays become larger, there is an increasing need for touch screens to support them. However, with a capacitive touch screen that uses ITO as the sensor pattern, there is a problem that the response speed is slow due to the high resistance value of ITO, and it was difficult to increase the area.
Also, the mask size used for patterning was not available for a large area.
Therefore, Cu mesh electrodes are used for large-area touch screens, but Cu mesh has problems such as light transmittance and the mesh sensor being visible.

NISSHA has solved the problem of increasing the area of the touch screen by developing a conductive material with low resistance and excellent permeability, and establishing a patterning technology by connecting multiple touch screens.

Utilizing this technology, we have succeeded in developing a capacitive touch screen up to 32 inches.

Latest touch screen expands its use 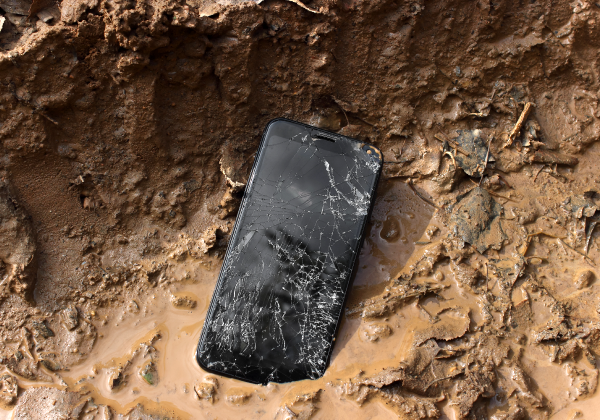 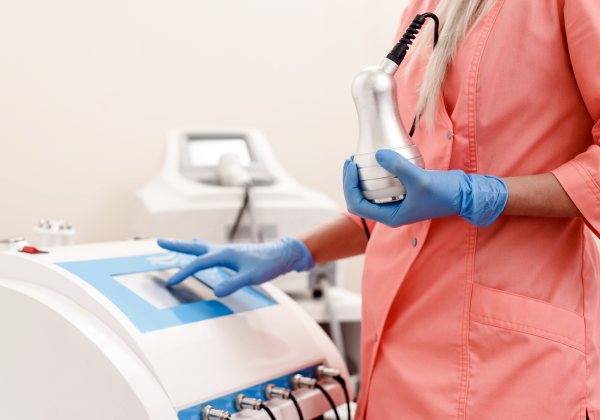 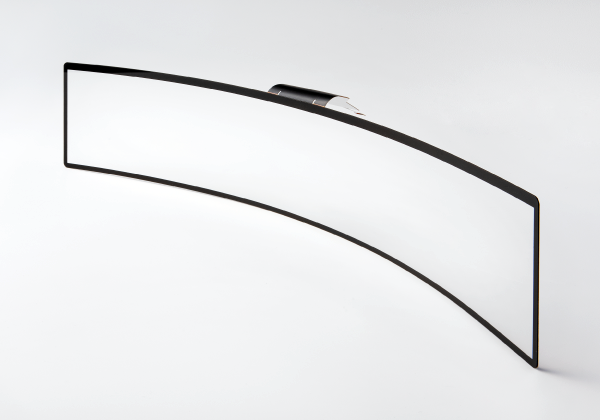 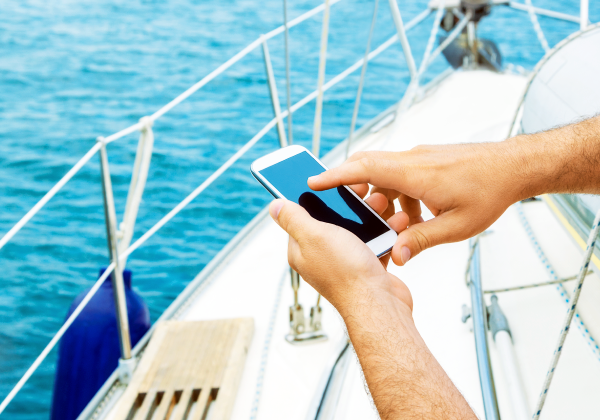 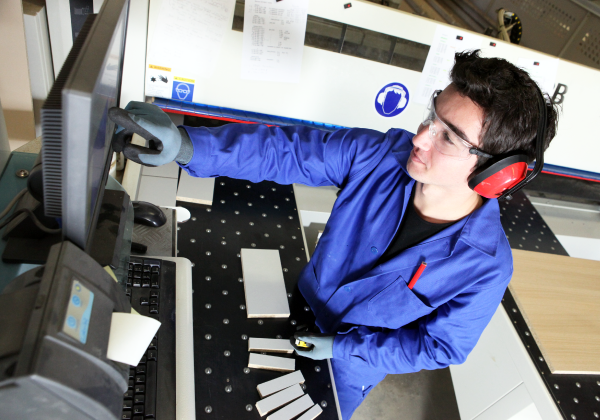 NISSHA accepts the production of custom products according to customer’s request.
Please feel free to contact us using the inquiry form.

We can undertake from material selection to production according to the specifications received from the customer.
From the manufacture of film sensors to the cover panel bonding module, we will deliver in the product form according to your request. 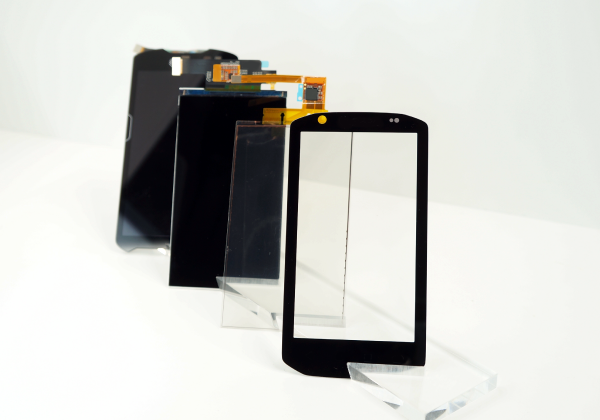